Joint Press Statement on the occasion of the visit to the Kingdom of Thailand by The President of the European Commission, Mr. José Manuel Barroso 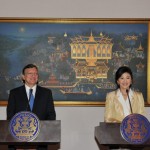 On 4 November 2012, the President of the European Commission, Mr. José Manuel Barroso,paid an Official Visit to the Kingdom of Thailand as Guest of the Royal Thai Government.  The President of the European Commission met with Her Excellency Ms. Yingluck Shinawatra,  Prime Minister of Thailand, at the Government House for bilateral discussions, followed by a dinner hosted in his honour. Both leaders held substantive and fruitful discussions on the strengthening of political, commercial and investment relations between Thailand and the European Union. Prospects of an EU – Thailand Bilateral Partnership Cooperation Agreement and Free Trade Agreement were central topics of the discussions.

President Barroso’s visit to Thailand, the first official visit ever by a President of the European Commission, is a vivid testimony to the EU’s and Thailand’s resolve to build a stronger and deeper partnership.

Highlighted in the discussions between both leaders were the promotion of relations in the political, social, trade and investment areas, the promotion of tourism, including the facilitation of people-to-people contacts, and cooperation in capacity building. In this context, President Barroso praised the Thai Prime Minister for Thailand’s return to political stability and its strong economic performance. The Thai Prime Minister, in return, congratulated the European Union for the 2012 Nobel Peace Prize, awarded in recognition of its contributions tothe advancement of peace, reconciliation, democracy and human rights in Europe. The Thai Prime Minister also invited the EU to take advantage of Thailand’s strategic location to intensify the EU’s trade and investment relations with ASEAN and beyond. Both leaders also exchanged their views on the global economic and financial situation.

Both leaders stated their firm commitment for an early conclusion of the Thailand-EUPartnership Cooperation Agreement and the launch of negotiations on a Free Trade Agreement in early 2013. These two key documents will form the cornerstones to strengthen the foundations of the Thailand – EU relations.

The bilateral discussions also embraced developments in the region, in particular ASEAN’s centrality in the evolving East Asian regional architecture,Thailand’s important role in ASEAN, and the forthcoming 9th ASEM Summit in Vientiane. President Barroso commended Thailand’s proactive role in improving the connectivity of ASEAN and stressed the importance of peaceful settlement of territorial and maritime disputes. The Thai Prime Minister encouraged the EU to further engage more actively with ASEAN and intensify ASEAN-EU relations and cooperation. Both leaders welcomed the ongoing reforms in Myanmar and emphasized the importance of joint efforts to render support to Myanmar’s reform process.

President Barroso invited the Prime Minister to visit Brussels at the earliest opportunity to continue the exchanges and deepen the bilateral relations between Thailand and the European Union.