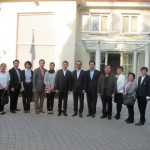 On 25 April 2012, Ambassador Apichart Chinwanno hosted dinner in honour of Mr.Chanin Roongsang, Chairman of the Committee on Economic Development of the House of Representatives of Thailand, and members of the Committee during their visit to Brussels.  The Committee also visited European Parliament in Brussels and attended the meeting with the Committee on International Trade (INTA) of the European Parliament. The Thai Committee stressed concerns  of the civil society and stakeholders in Thailand to the INTA regarding the Free Trade Agreement (FTA) negotiations between Thailand and the European Union which has been launched in March 2013.