Ambassador Apichart Chinwanno met with Mr. André Flahaut, President of the House of Representatives of Belgium 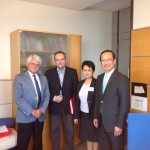 On 12 July 2013, Ambassador / Head of Thai Mission to the European Union (EU) accompanied by Ms. Pimchanok Vonkhorporn, Commercial Affairs Minister, paid a courtesy call on H.E. Mr. Vital MOREIRA, Chairman of the International Trade Committee of the European Parliament (EP) to introduce himself and discussed on how to further promote Thai-EU relations and cooperation.   One of the main highlights of the discussion was the Ambassador’s request for the strong support for the on-going Thailand – EU Free Trade Agreement (FTA) negotiation where the first formal negotiation round had been held in Brussels during 27-31 May 2013.  Mr. MOREIRA expressed EP’s satisfaction with the results of the first round of the FTA negotiation and further reassured members of the European Parliament’s full support for the FTA negotiation between Thailand and the EU.