Ambassador and Mrs. Nopadol Gunavibool attend the 8th General Annual Meeting 2014 of the Union of Thai Sanghas in Europe at Mechelen 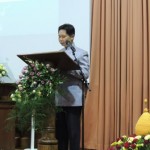 On Sunday 24 August Ambassador and Mrs. Nopadol Gunavibool attended the 8th General Annual Meeting 2014 of the Union of Thai Sanghas in Europe organized by Wat Dhammapateep at the Diocesan Pastoral Center in Mechelen.  Ambassador Nopadol joined Phrapromvajirayan, Head Abbot of Wat Yannawa in Thailand; Mr. Marc Hendrickx, First Alderman and Member of the Flemish Parliament; and Mr. Waldimar Van der Elst, President of Wat Dhammapateep on behalf of the Roman Catholic Church in Mechelen in delivering welcoming remarks. Ambassador Nopadol expressed his appreciation to the Thai Sanghas and Thai temples for their close cooperation with the Ministry of Foreign Affairs in promoting Buddhism overseas and in establishing a strong and self-reliant Thai community overseas. Ambassador Nopadol also pledged the Embassy’s full support to facilitate and reduce complications in obtaining a long-term stay permit for Thai Sanghas in Belgium, which may also be a shared concern among other Thai Sanghas in Europe.

Approximately 80 Thai Sanghas from Thai temples all over the world attended the meeting. The Ambassador and his wife as well as staff from the Embassy joined fellow Buddhists in listening to the sermon by Phra Dhammakittiwong, Head Abbott of Wat Ratchaorasaram in Bangkok, Thailand on “A Perspective on Developing Thai Temples in Europe: The Current Situation and Future Directions” in the afternoon.

– Click her to read Remarks by H.E. Mr. Nopadol Gunavibool –