Ambassador of Malaysia pays an introductory call on the Ambassador 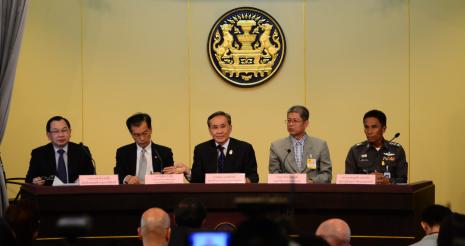 On 30 January 2015, Mr. Don Pramudwinai, Deputy Minister of Foreign Affairs, as Chairman of the National Sub-committee on Law, Partnership and Awareness Promotion on Trafficking in Persons, together with top officials from related line agencies gave a press conference on Thailand’s Trafficking in Persons 2014 Country Report, soon to be launched.

Thailand’s Anti-Human Trafficking Act B.E. 2551 (2008) commits related line agencies to report annually on the country’s progress and development made in the efforts to combat human-trafficking through improved policies and deliverable measures, which covers the 5Ps strategy of Policy, Prosecution, Protection, Prevention, and Partnership.

Since May 2014, the new administration and the subsequent Government has made combating trafficking in persons an integral part of their Reform Agenda.  As one of the top national priorities, this administration has increased the allocation of budget for the budget year 2015 (October 2014 to September 2015) to 496.82 million baht (or about 15.52 million USD), and declared zero tolerance to human trafficking and its nurturing conditions, including corruption and complicity of state officials.

General Prayut Chan-o-cha, Prime Minister, personally took charge of fighting the problem and instructed all line agencies to expedite their work in utmost effective manner.  Special emphasis is given to punishing officials who are complicit in the crime.  The Prime Minister has declared zero tolerance to human trafficking and the conditions that enable it.   Long-term solutions to address the problem at root causes have also begun, such as developing Special Economic Zones along the border between Thailand and its neighbours in order to reduce development gap between large urban areas and remote provinces.  The Government has made significant progress and achieved a number of tangible results in combating human trafficking.

Among the key achievements in 2014 highlighted in the report are:

(1) The government has reinforced and strengthened coordination and integration among public agencies in all dimensions, both at the policy level where the Prime Minister himself chaired the National Committee, and at the implementation levels, thereby increasing the effectiveness of combating the crime.

(2) The registration of about 1.6 million illegal migrant workers through 87 registration centers countrywide, has helped to better protect these workers and lessen the chances of them falling prey to labour exploitation and human trafficking.  The measure has also helped to raise people’s awareness of labour exploitation and human trafficking, and the penalties attached to it.

(3) Several laws and regulations have been improved to better address wide-ranging dimensions of human trafficking.  There are more measures for protection, and the scope of prosecution has been broadened, for example:

– The Amendment of the Anti-Human Trafficking Act B.E. 2551 (2008) to provide better protection to witnesses and officials on duty, while increasing penalties for human trafficking offenders,

– The Labour Ministerial Regulation to Protect Labor in the Sea Fishing Industry B.E. 2557 (2014) to provide workers with better protection and better work conditions, and in particular to raise the minimum age of labour at sea to 18 years of age, thereby preventing exploitation of young people,

– Other laws have also been used to put pressure on human trafficking syndicates, such as anti-money laundering and anti-tax evasion laws, the monitoring of suspects on temporary bail, the use of Provincial Governors’ authority and administrative power to close down at-risk or involved venues of human trafficking, etc.

(4) Legal proceedings and disciplinary punishment against government officials involved in human trafficking and illegal exploitation, or conspiring to the crime through negligence, have been increased. The government is also strengthening corruption-monitoring mechanisms, so that they can monitor and take disciplinary and criminal actions against corrupt officials without interference.

In 2014, 595 victims of trafficking in persons have been identified; 280 cases were investigated, 115 cases were prosecuted and 104 defendants were convicted; 5 employment agencies were punished while 134 cases of illegal brokers are being prosecuted.  Furthermore, more complex cases are being investigated with cooperation between the government and the civil societies, leading to the rescue of 16 cases involving human trafficking syndicates.

(5) 24-hour Hotlines have been made available (‘Dial 1300’) to receive information for all kinds of complaints related to human trafficking, child labour, as well as domestic violence especially those against women and children, with interpreters in 5 languages (Burmese, Chinese, English, Khmer, Vietnamese).  These channels, which in 2014 received more than 3,400 complaints, helped law enforcers identified 123 cases related to human trafficking, and further investigated and apprehended perpetrators in high-profile cases.

Thailand recognizes that, having made much progress in 2014, many challenges still remain to be dealt with.  Our annual report on trafficking in persons is therefore not only to explain the situation to the public, but also to stimulate government authorities to strive for better solutions.  With the leadership’s strong commitment, Thailand will intensify its engagement and cooperation with a wider group of stakeholders in public and private sectors, both domestically and internationally.