Joint operation to combat human trafficking in the fishing industry 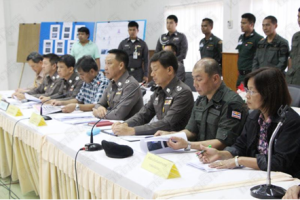 The operation was initiated by intelligence received from the Environmental Justice Foundation (EJF) as well as the rescue of 18 sea labourers from Myanmar, 11 of which were identified as trafficked victims.  The migrants, who were allegedly forced to work on a fishing boat operated by the President of the Kantang Fishing Association, had provided investigators with information about the criminal network and evidence for the arrest warrants.

In pursuance of the arrest warrants, interagency teams were set up to target 11 onshore and offshore targets which were linked to the President of the Kantang Fishing Association.  Region 9 Police led the onshore operation and arrested 5 suspects for their alleged involvement in human trafficking and forced labour.  As for the offshore operation, the Third Naval Area Command and the Marine Police tracked 3 suspected trawlers, namely, the Wanich Pramong, Poka Sathaporn 19 and Poka Sathaporn 34, and apprehended 3 skippers, totaling the arrests of 8 suspects.

No place for influence-peddling

Among the suspects arrested is Mr. Sompol Jirotmontree or “Ko Nang” who is the President of the Kantang Fishing Association, the owner of the Poka Sathaporn Fish Market and the brother of the Mayor of Kantang Municipality.  In addition to the human trafficking charges, the Police are now working with the AMLO on the possible seizure of his assets.