Ambassador of Thailand to Belgium hosted a dinner in honour of the Secretary-General of the Agricultural Land Reform Office and the Chairman of the Appeal Committee, Social Security Office, on the occasion of their visits to the Kingdom of Belgium

Ambassador of Thailand to Belgium hosted a luncheon for Mr. Georges Dallemagne, Chairman of the Belgian-Thai Bilateral Section of the Belgian Inter-Parliamentary Union 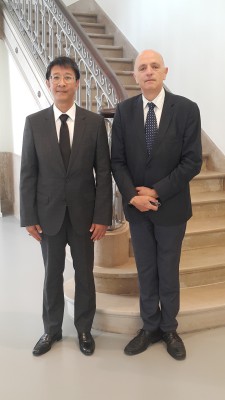 On 27 October 2017, Ambassador Manasvi Srisodapol hosted a luncheon for Mr. Geroges Dallemagne, Chairman of the Belgian-Thai Bilateral Section of the Belgian Inter-Parliamentary Union, to discuss about Mr. Dallemagne’s plan to visit to Thailand in November 2017. And during his visit to Thailand on 10 November 2017, Mr. Dallemagne paid a courtesy on H.E. Mr. Kitti Wasinondh, Vice-Chairman of the Committee on Foreign Affairs of the National Legislative Assembly (NLA) of Thailand and Member of Thailand-Belgium Parliamentarians Friendship Group, aslo present were H.E. Mr. Philippe Kridelka, Ambassador of Belgium to Thailand, Members of Thailand-Belgium Parliamentarians Friendship Group and Mr. Raschada Jiwalai, Deputy Director-General of the European Affairs Department of the Ministry of Foreign Affairs of Thailand. Both sides discussed about enhancing bilateral relations and cooperation, the exchange of visits of parliamentarians and the activities to mark the 150th Anniversary of the signing of Treaty of Amity and Commerce between Thailand and Belgium in 2018. 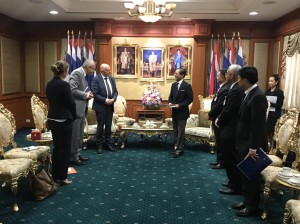