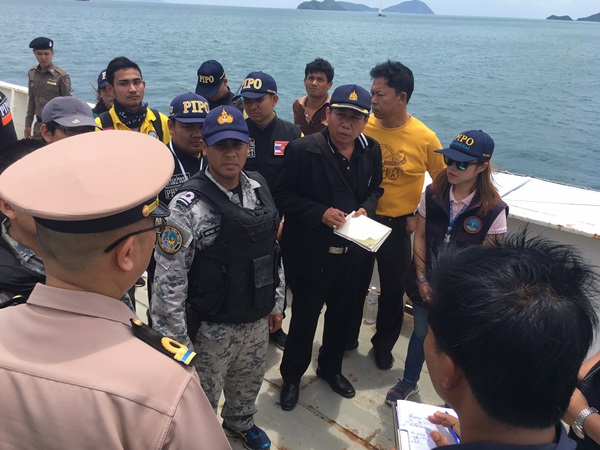 During the night of 13 September 2019, a fish carrier vessel named “Uthaiwan” was seized and put under arrest in Thai waters on the coast of Pang-nga near Phuket. The vessel’s owner claims that it holds a Cameroon flag. The vessel is associated with a history of illegal, unreported, and unregulated (IUU) fishing in many countries around the world under the previous name “Wisdom Sea Reefer” as well as coordination with other IUU fishing vessels. The Royal Thai Government will investigate this vessel, its crew, and owners for violations of Thai law and looks to cooperate with other governments in investigating violations of their laws as well.

Adisorn Promthep, Director-General of the Department of Fisheries (DOF), reported that this operation became a success due to a collective effort from all the parties, domestic and international, especially the Navy, the Fisheries Department, and the Marine Department, as well as INTERPOL, the European Commission (EC), and OceanMind, a non-profit organization from the United Kingdom supporting governments in the surveillance and investigation of IUU fishing.

Before this joint seizure, officers of the Thai Fisheries Monitoring Center (FMC) and OceanMind had monitored and received useful information on Uthaiwan from INTERPOL and the EC, confirming that it was the same vessel listed as an IUU vessel by the IOTC. Uthaiwan’s likely previous name was Wisdom Sea Reefer with Honduras flag. The vessel was monitored by satellites since its departure from Cambodia. The vessel then entered Thai waters without notifying or asking the Thai Marine Department for permission, a requirement under Thai law for all foreign vessels.

On 13 September 2019 the FMC and OceanMind provided surveillance information in real time to patrol vessels to enable a successful interdiction. The Thai FMC had excellent support from the Navy’s Thailand Maritime Enforcement Coordinating Center (Thai-MECC) Region 3 and the Marine Department to seize and arrest Uthaiwan. Thai-MECC Region 3 commanded two vessels, Royal Sriracha and To.113, to intercept the vessel, and FMC requested assistance from a private party in Phuket to provide a speed boat to bring a multidisciplinary team from the Thai Government’s Port-In-Port-Out Center for fisheries inspection. Tanvisit 5 was then provided to the PIPO Center in less than half an hour from when the FMC had contacted the private party to commission the use of the vessel.

The vessel was boarded by a combined inspection team from all of the patrol vessels in the early hours of 14 September 2019. An initial examination concluded that it was an IUU-fishing vessel with eight Thai crewmen. Uthaiwan’s owner and operator are accused of violating the Act on Navigation in the Thai Waters B.E. 2456 and the Royal Ordinance on Fisheries B.E. 2558, specifically Section 94. Section 94 of the Royal Ordinance on Fisheries prohibits bringing into the Kingdom a non-Thai fishing vessel having committed IUU fishing. The vessel was immediately taken back to Phuket Deep Sea Port for a full investigation. Pol. Lt. Gen. Jaruwat Waisaya, Chairperson of the Subcommittee on Examination and Monitoring Law Enforcement of the Command Center for Combating Illegal Fishing (CCCIF) will personally lead the investigation.

DOF is currently working with an investigation team from the Royal Thai Police in collecting information, especially on the fisheries history, labour, fish transshipments in the waters of different countries, landings of fish in different countries, different national flags used by the vessel, as well as the ownership history of the vessel. So far, it was found that the vessel’s owners and operators used flags of many countries which could relate to various real and fake documents. DG Promthep further stated that DOF will closely examine this matter and all the information will be very used in cooperation with different countries to enhance efforts to combat IUU fishing and associated criminal activities.