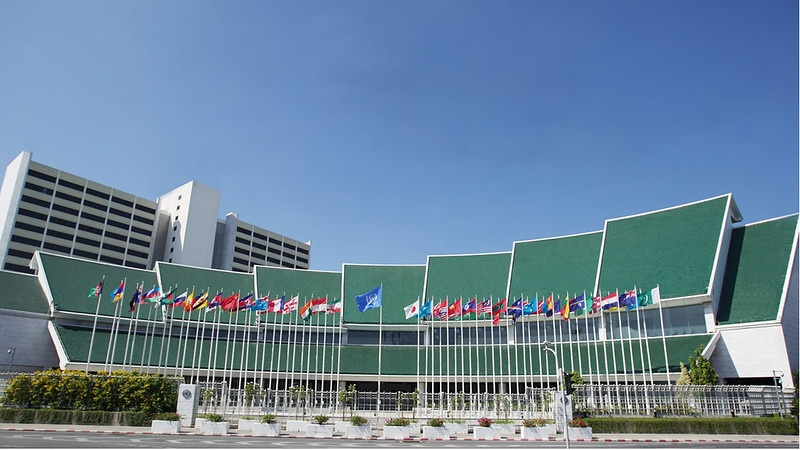 United Nations Economic and Social Commission for the Asia-Pacific in Bangkok. Photo by UNESCAP

How did Thailand join the United Nations and what have we achieved in the past 75 years with the UN?

At the end of 1945, a group of nations assembled to revive multilateral cooperation in the aftermath of World War II. The bombing of Hiroshima and Nagasaki had just become a watershed moment proving modern warfare was a feat unaffordable to mankind in the age of nuclear weapons. The Palace of Nations, a grand testimony to the League of Nations, had been left abandoned since the outbreak of the war in 1939. The first supranational organization that was forged under the will of Woodrow Wilson had failed to provide collective security and unite governments in the face of fascist aggression. What the new United Nations organization must now achieve is to maintain peace between the great powers, safeguard the sovereignty of small nations, and rebuild the fractured trust in the international system.

The Kingdom of Thailand had just emerged from the spoils of World War II after sustaining imperialist threats from Europe and the Far East by sacrificing its neutrality. It had declared war upon the Allied Powers under the threat of Japanese expansionism and must now prove its goodwill and fidelity to world peace.

Direk Jayanama, who was the Thai Foreign Minister at the time, documented his memories of Thailand’s entry into the UN in his autobiography “Thailand and World War II.” By joining the UN, Thailand would remain safe under collective security and furthermore be respected by other nations. Direk then sent his trusted colleague Prince Wan Waithayakorn to seek support for Thailand’s application to the United Nations at an FAO meeting in Washington D.C. in May of 1946.

Thailand’s application to the UN was far from a hop skip down the road. While the UN Charter welcomed all peace-loving countries willing to abide by its principles, they also must be recommended by all the permanent five members of the UN Security Council. At the time, the United States was a vehement supporter of Thailand’s application. However, France and Great Britain viewed Thailand’s declaration of war an aggressive betrayal of the Allies to fulfil its revanchist aspirations in Indochina.

Direk and Prince Wan Waithayakorn would spend several arduous months negotiating the terms of Thailand’s entry into the UN. By December of 1946, a settlement was finally reached among the opposing members of the P5. Tensions with France which remained from the Franco-Thai War of 1941 were resolved after 3 provinces were returned to the French Protectorate of Cambodia. Thailand then took responsibility for damages caused to domestic British property throughout World War II. Hence on December 15th 1946 according to UN records, Thailand was admitted as the 55th member of the United Nations. This marked the end of Thailand’s struggles in fending off imperialism that had kept the country on its feet for over half a century. 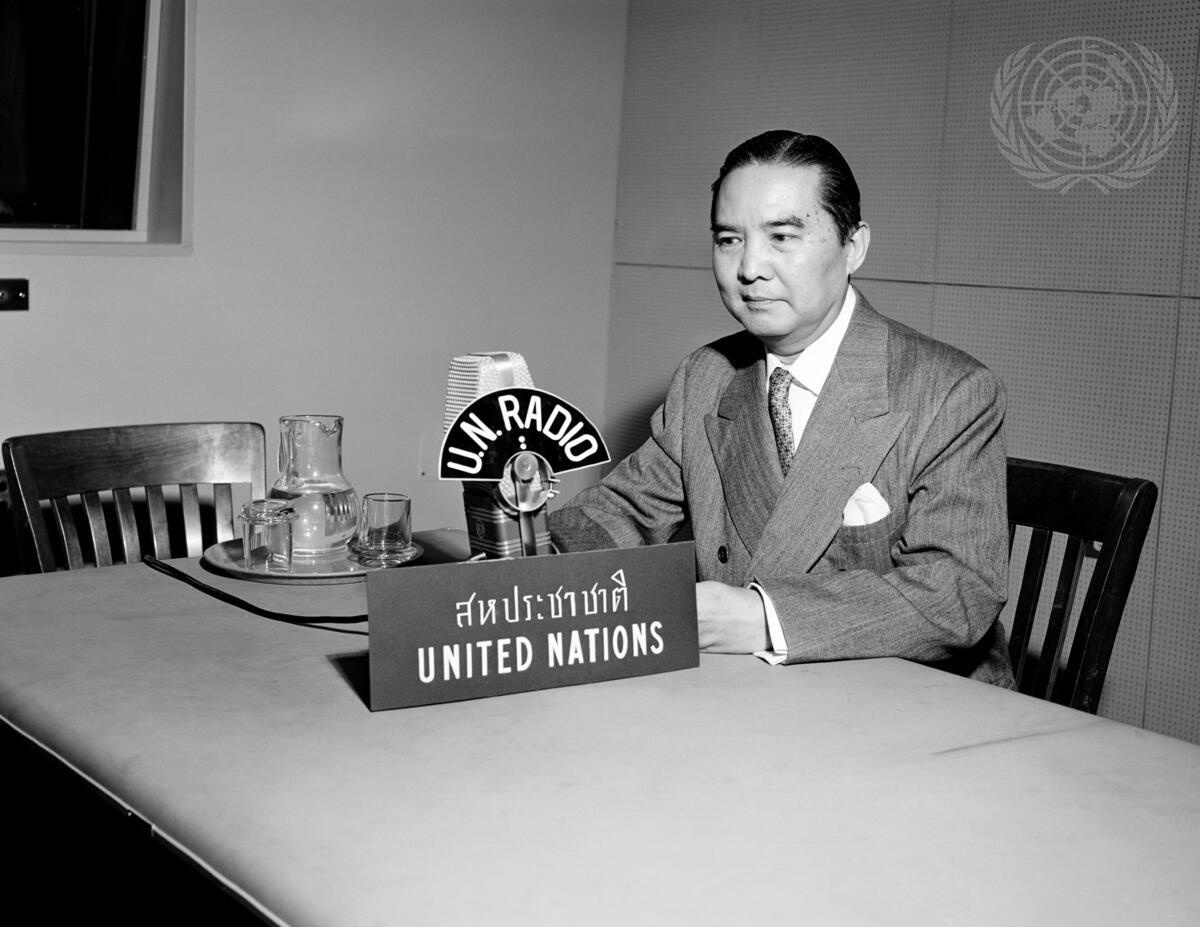 Prince Wan Waithayakorn who successfully orchestrated Thailand’s application to the UN then became Thailand’s first ambassador to the United States. He would later be selected as President of the UN General Assembly’s 11th Session in 1956. Direk resigned after Thailand’s entry into the UN and went on to serve as Deputy-Prime Minister of Thailand.

One of the first endeavors of Thailand’s membership was to host a number of UN agencies in Bangkok due to its early entry into the United Nations. This initiative was greatly endorsed by the United States who had become a firm ally during Dean Acheson’s declaration of the Defensive Perimeter.

The Economic Commission for Asia and the Far East (or ECAFE) had just started operating in Shanghai in 1947 and was the first forum which allowed many countries in Asia to participate in the work of the United Nations. However in the final year of the Chinese Civil War, the PLA army under Mao Zedong had overrun Shanghai in 1949 and ousted Chiang Kai Shek’s ROC Armed Forces to Taiwan. The P5 seat of the People’s Republic of China would remain unrecognized by the UN until 1971. ECAFE was then moved to Bangkok that same year where its first headquarters were located at Sala Santitham. It was later renamed UNESCAP in 1976 and moved to the iconic green-roof building on Ratchadamnoen Avenue. 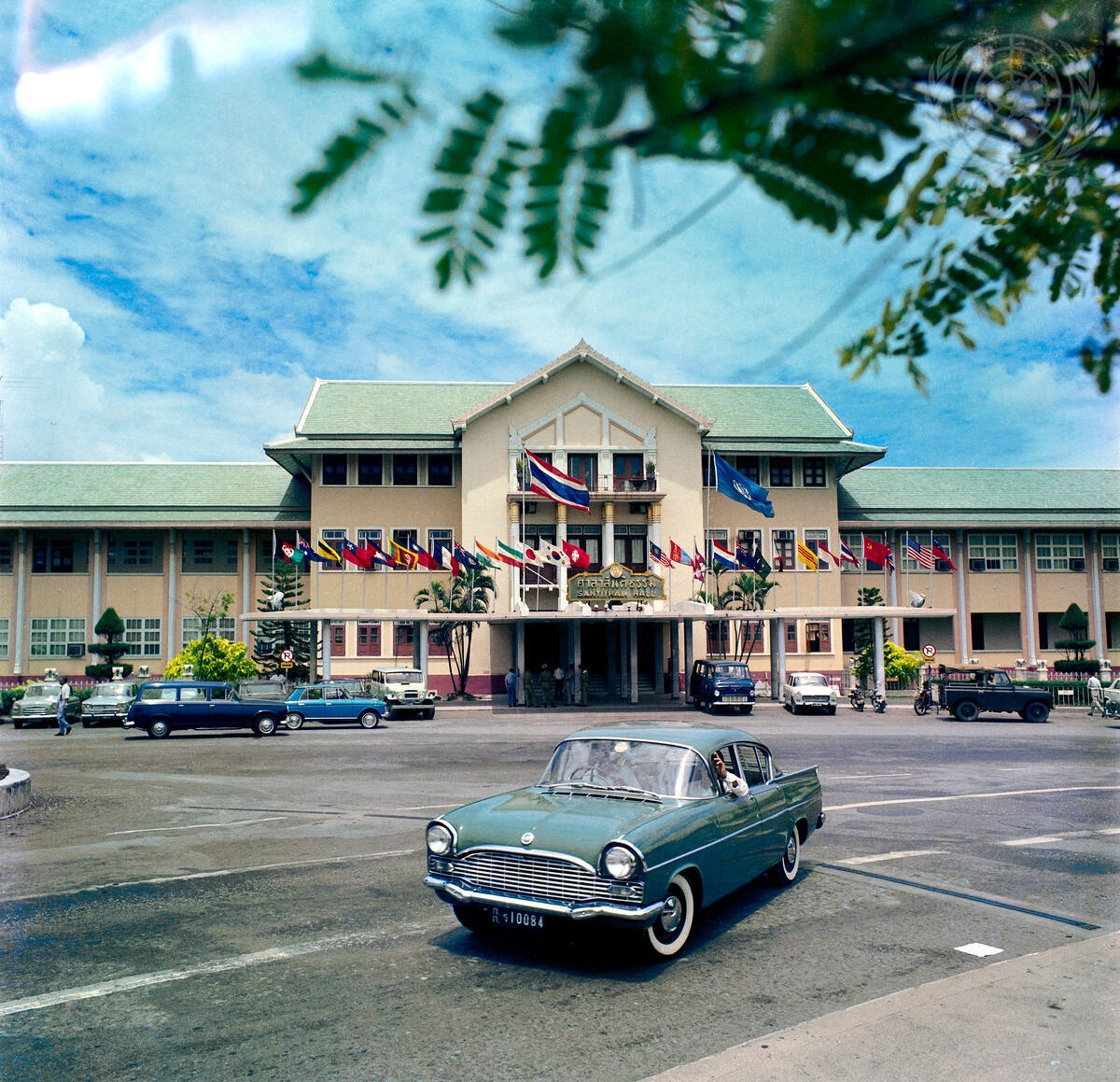 In the wake of the Korean War of 1950, Thailand was the first Asian nation to offer ground troops to the UN Force. Prime Minister Plaek Pibulsonggram had contributed over 11,700 ground troops and 40,000 tons of rice by 1955.

Thailand would continue to pledge its support to peacebuilding with over 27,000 Thai peacekeepers having been deployed to a number of United Nations missions as of 2020. The most notable of these contributions would be the ongoing provision of technical support to the UN Mission in South Sudan. Early in September 2020, 273 military engineers were sent on another mission with a deployment ceremony and a mandatory 14-day quarantine. Their work involves constructing infrastructure such as houses, roads, and bridges for civilians. As a country with an abiding faith in multilateralism and pacific settlement of disputes, Thailand is proud to have served as a non-permanent member of the UN Security Council in 1985 and looks forward to serving again in the future.

Today Thailand’s operations with the United Nations is coordinated by the Thai Ministry of Foreign Affairs’ Department of International Organizations. In an interview with some leading diplomatic personnel of this department, Ms. Napat Dumkhun briefly summarized the current outlook and achievements of Thailand in the last four decades. “The work of the United Nations is now not only applicable to diplomatic personnel, but it has gradually shifted towards a variety of different sectors of Thai society to bring about a society-wide inclusion of United Nations principles” says Ms. Dumkhun. “We possess an extremely high level of gender equality where women are not obstructed by laws or pay gaps in their professional career, it is more accurate to say that us women have never been held back by such barriers in Thailand.” 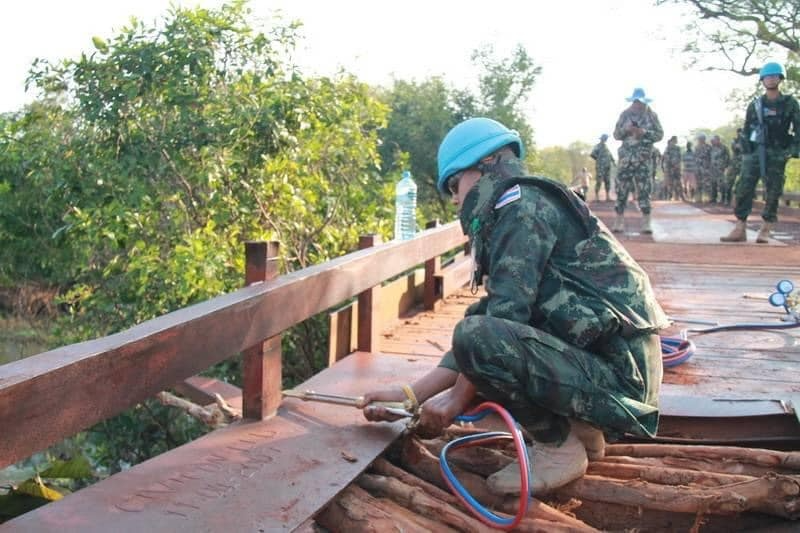 Thailand was recently selected as the chairman of the Group of 77 in 2016 which focused on the realization of the Sustainable Development Goals. The Sufficiency Economy Philosophy was promoted as the Thai alternative to achieving the SDGs that was highly regarded as a universally applicable philosophy. The Group of 77 is the largest intergovernmental organization of developing countries in the United Nations comprising 134 members.

Mrs. Maratee Nalita Andamo the current Director of the Social Division has worked with the United Nations as part of the permanent mission for the past eight years. She states that “Thailand is an enthusiastic propagator of social development in the United Nations- our defining trait is our ability to build bridges with any government as an approachable cosmopolitan nation.”

An area of development which Thailand excels is the establishment of the Universal Health Coverage Scheme in Thailand. This scheme which lies at the heart of Thailand’s public health system has been promoted at the UN General Assembly as the right to access the highest attainable standard of mental and health care. Mrs. Andamo’s time in New York also involved Thailand’s active espousal in establishing the World Soil Day (WSD) with a view to raising awareness on soil erosion. The initiative first came to light upon the recommendation of the International Union of Soil Sciences (IUSS) in 2002. With Thailand’s leadership in such initiative, the Food and Agriculture Organization (FAO) rendered its support to WSD as an international awareness raising platform on the importance of healthy soil with the FAO Conference unanimously endorsing World Soil Day in June 2013. Subsequently, the UN General Assembly at its 68th Session, upon the FAO’s request, designated 5 December 2014 as the first official WSD.

For future goals Mrs. Andamo says she would like to see Thailand play a larger role in building peace and security. “It is an area outside our comfort zone which I would love to see us move towards in the future.”