Pandemic or not, Thailand remains all-time favourite regional business base 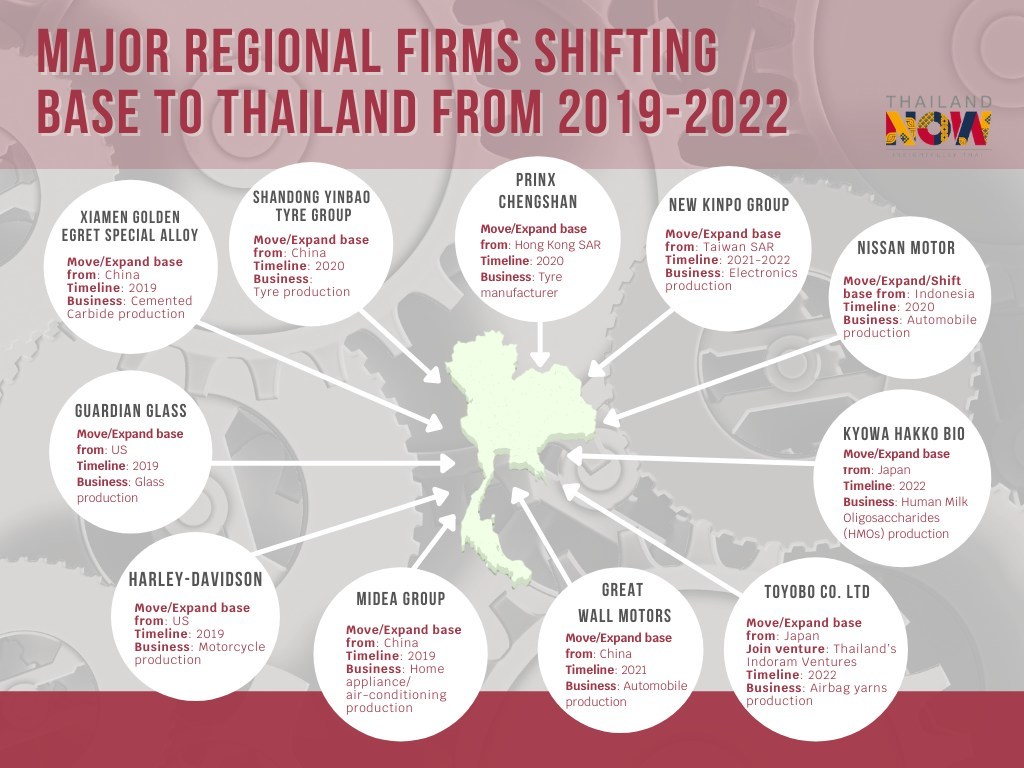 BANGKOK, May 25, 2021 /PRNewswire/ — Disruptions in the global supply chain brought about by the COVID-19 pandemic are motivating manufacturers to shift their production facilities to Southeast Asia, as the region has been able to contain local outbreaks quite well, compared to other regions. This has encouraged Thailand to roll out measures making it one of the top choices for foreign investors.

Moreover, over the past few years, labour costs in China are also becoming less competitive. Governmental support for foreign direct investment in Southeast Asia is also becoming more sophisticated and attractive. Most importantly, particularly in Thailand, investors are able to capitalise from the numerous regional and bilateral free trade agreements that Thailand has concluded with its partner countries. All these factors are of vital importance at times when investors need to lower the risk of supply-chain disruptions.

The Eastern Economic Corridor (EEC) is also a strong competitive advantage for investors in Thailand, thanks to its well-established and functioning supply chains, developed infrastructure, investment privileges and incentives, and availability of a skilled and affordable workforce. Moreover, the EEC Policy Committee is redefining target industries and strategies to boost opportunities to attract foreign investment.

With an added focus on S-Curve and New S-Curve industries, the committee focuses on industries in which the EEC has a distinct competitive edge.

There is no one-size fits all. Foreign investors need to dive deep into information before embarking on any planned relocation process. Hence, a tailor-made approach is required for each industry as per its requirements. And this is where Thailand can make a difference, because customised service is exactly what the Board of Investment (BOI) can provide for its clients.

Preparing the field for a wider, market outreach

Currently, the government is eyeing measures to upgrade Thailand’s business environment for foreign investors. In order to do this, key laws will be improved or repealed to remove obstacles, such as capping personal income tax for foreigners at no more than 17%, making Thailand more attractive compared to other countries in the region.

In addition, the Regional Comprehensive Economic Partnership (RCEP) Agreement signed on November 2020 by leaders of ASEAN countries, plus Australia, China, Japan, Republic of Korea and New Zealand, will benefit the region significantly in the post-COVID era.

The RCEP agreement, targeted to enter into force in January 2022, is Asean’s biggest free-trade pact to date. It covers a market of 2.2 billion people worth USD26.2 trillion or 30% of the world’s GDP.

According to Thailand’s Department of Trade Negotiations, the country will benefit from lower trade barriers on industrial and agricultural goods, reduction of tariffs, expansion of market access in RCEP members states, strength of supply chain connectivity as well as RCEP’s favourable rules of origin.

The agreement will enable significant growth in trade among RCEP members. In 2019, Thailand’s total trade flow between RCEP members accounted for 56.9% of its imports-exports.

The pact will also make Thailand a preferred manufacturing base in Asia. RCEP supports strategies where businesses set up production facilities for their supply chain in several countries to diversify risk caused by disruption and to become more competitive.

Favourable Incentives for Investment…no one does it like Thailand

Duangjai Asawachintachit, Secretary-General of the Board of Investment (BOI), explained that Thailand has strong supply chains in several industries, especially food, automotive, electronics/electrical appliances and medical supplies. Moreover, upgraded investment incentives are a major factor that attract investors to the Kingdom.

In December 2020, BOI approved a series of measures to accelerate investment, particularly in target industries, and to encourage businesses to adopt digital technology. The package promoting large-scale projects was designed to boost investment in the post-COVID-19 period.

Under measures to accelerate investment in target industries, projects with realised investments of at least THB100 billion (USD33 million) within 12 months from the promotion certificate issuance, will be eligible for an additional 50% corporate income tax (CIT) deduction over a period of five years, over and above the standard five to eight years of CIT exemption. Qualified projects have between January 4 and the last working day of 2021 to submit their application.

The electronics industry, particularly, is flourishing thanks to an increase in investments in IT infrastructure to support continuous adoption of advanced technology, including Big Data and 5G. Thailand is the first country in Southeast Asia to commercialise 5G technology.

Between July 2018 and September 2020, 170 foreign direct investment applications were submitted to the BOI with investment adding up to about THB1 billion (USD3.3 billion). Most of the investors hailed from China, Taiwan and Hong Kong, who wanted to shift their production facilities for smart electronics, auto parts and metal products to Thailand.

Kriangkrai Thianukul, vice president of the Federation of Thai Industries (FTI), said meetings with investors from Japan, the US and Europe earlier this year revealed that many companies were planning to move out of China to cut down on future risks. Thailand is among the top choices in Southeast Asia because it has several seaports and geographically stands at the heart of the region.

Jitti Tangsithpakdi, president of the Thai-Chinese Chamber of Commerce, told Nikkei Asia that Chinese investment has flooded into Thailand over the past two years, as investors seeking to avoid higher U.S. tariffs were attracted by Thailand’s policy to attract Chinese businesses.

An eye on switching bases

Japanese investors have for decades been the top foreign investor in Thailand, and the Japanese government continues to support their business people to establish production bases in the Southeast Asian country. The Japan External Trade Organisation (JETRO) also says that that several Japanese manufacturers have received financial support from their country’s Ministry of Economy, Trade and Industry (METI) to relocate production facilities to Thailand. In April 2020, Japan earmarked a USD 2.2 billion economic stimulus package to help its manufacturers move out of China as the COVID-19 pandemic disrupted supply chains. Among them are Amtech, San Alloy, Nadaka, Nikkiso, NikkiFrom, and Riki.

However, a report from Mitsui & Co Global Strategic Studies Institute shows that direct investment from China has been increasing steadily since the second half of 2018, especially in the manufacturing sector.

American technology firms like Apple, Google and Microsoft are also looking to move some hardware production facilities from China to other countries, including Thailand and Vietnam. Nikkei reported that Google has asked a manufacturing partner in Thailand to prepare production lines for its smart-home products, such as voice assistant-enabled speakers. Other big companies that have relocated to Thailand include Casio Computers, Daikin Industries, Sony, Sharp and Delta Electronics.

Industrial estate developers are also making moves to tap the growing demand. The Industrial Estate Authority of Thailand (IEAT) is planning to invest THB800 million (USD26.7 million) to build the first phase of Smart Park Industrial Estate in 2021, which is scheduled for completion by 2024. The authority will also accelerate the adoption of 5G technology at all its five industrial estates, namely Map Ta Phut, Laem Chabang, Bang Pu, Lat Krabang, and the Northern Region Industrial Estate in Lamphun. Over the next three years, 5G will significantly transform the manufacturing process into a digital platform mainly controlled by the use of robots and automation.

In addition, the IEAT board of directors approved a proposal from private firms to establish three new industrial estates in the EEC area worth a total investment of over THB80 billion (USD2.7 billion). These projects include the 2,000-rai (790-acre) Rojana Industrial Estate and 2,600-rai (1,028-acre) Asia Clean Industrial Estate, which are both in Chon Buri, as well as the 650-rai (258-acre) Egco Industrial Estate in Rayong.

In mid-October 2020, WHA Group, one of Thailand’s leading providers of integrated logistics and industrial facilities, introduced its first e-commerce park to enhance logistics in the EEC area. Covering an area of more than 200,000 square metres in Chachoengsao’s Bang Pakong district, it has been designed as a smart park equipped with top technology including automated loading doors, robotics and logistics solutions to facilitate distribution and online trading services.

The bar has been set high for any government wanting to attract foreign direct investment due to the new black swans of the century such as trade wars and a pandemic of unpredented scales…but it appears Thailand has thought ahead of its time, and is prepared for any unknown disruptions ahead, come what may. Any keen investor looking to come to Southeast Asia should definitely look this way. For more information, just write us and we’ll connect you to the right people. thailandnow.info@gmail.com