The Royal Thai Embassy, in collaboration with the Embassies of the ASEAN Member States in Brussels, Organized the ASEAN Bike Ride and ASEAN Family Day 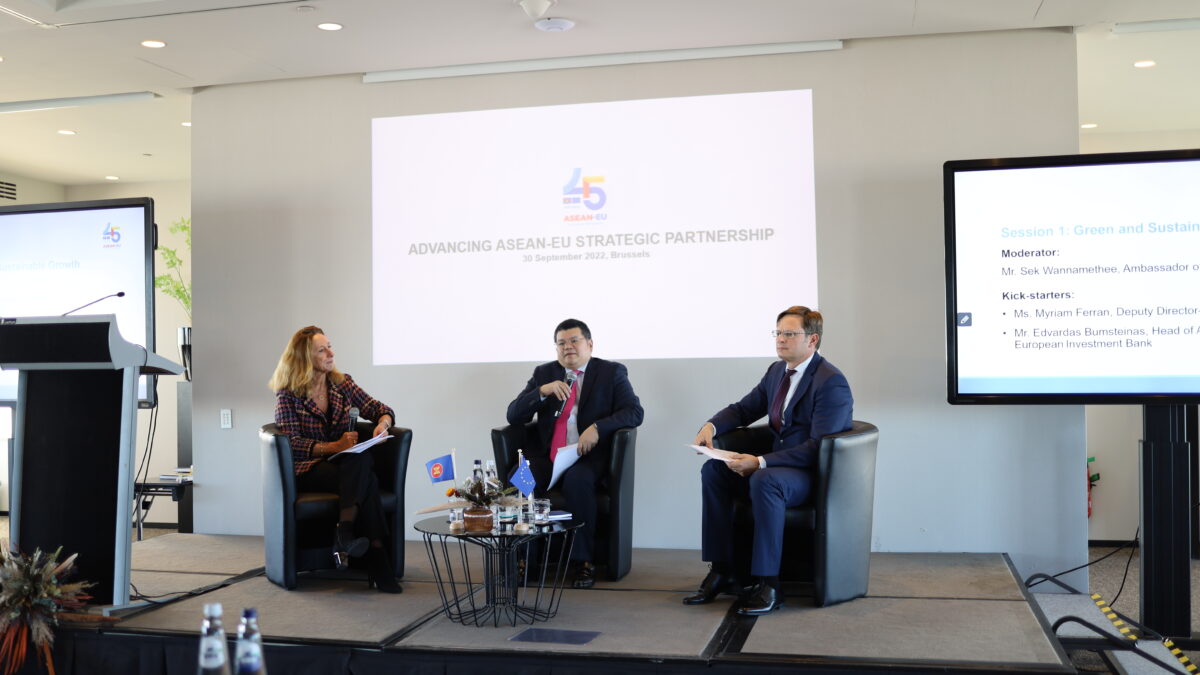 On 30 September 2022, the Royal Thai Embassy, in collaboration with the Embassies of the ASEAN Member States in Brussels (jointly referred to as the ASEAN Brussels Committee – ABC), organized a Roundtable Discussion on “Advancing ASEAN-EU Strategic Partnership” at The Hotel Brussels. About 70 participants, including ASEAN Ambassadors and diplomats, key officials from the European Union, as well as representatives from the private sector and academia, attended. The purpose of this Roundtable was to exchange views and ideas on advancing the ASEAN-EU Strategic Partnership and our cooperation in the larger Indo-Pacific region. The Roundtable is also a part of a series of events being organized by the ABC on the occasion of 45th anniversary of ASEAN-EU dialogue relations and leading up to the ASEAN-EU Commemorative Summit scheduled on 14 December 2022 in Brussels.

On this occasion, H.E. Mr. Sek Wannamethee, Ambassador of Thailand, gave welcoming remarks stressing the forward-looking cooperation between ASEAN and the EU and how the ASEAN-EU partnership is growing in importance in the current geopolitical context. The Ambassador of Thailand highlighted Thailand’s active contribution in the ASEAN-EU relations. For instance, Thailand is the ASEAN Coordinator for the ASEAN-EU Sustainable Development Dialogue. The ASEAN Center for Sustainable Development Studies and Dialogue (ACSDSD), which is based in Bangkok, has recently worked with the EU to establish an ASEAN Circular Economy Stakeholder Platform as an avenue for exchange of best practices relating to circular economy.

H.E. Mr. Nong Sakal, Ambassador of Cambodia, in his capacity as chair of ABC and Cambodia’s ASEAN chairmanship, gave opening remarks highlighting the focus of Cambodia’s chairmanship on fostering solidarity within ASEAN and beyond in addressing common challenges together. Cambodia has also extended an invitation to the President of the European Council Mr. Charles Michel to attend, as Guest of the ASEAN Chair, and deliver a statement on food and energy security at the East Asia Summit, to be held back-to-back with the ASEAN Summit in Cambodia this November.

The roundtable discussion consisted of 3 sessions touching upon priority areas in the ASEAN-EU agenda. The sessions were led by the following ASEAN Ambassadors and EU officials:

The ASEAN diplomatic corps and EU representatives exchanged views and ideas in a frank and constructive manner. Key takeaways are as follows:

EU’s Global Gateway Strategy, which was announced in December 2021, focuses on green infrastructure financing which will be mobilized through Team Europe – a joint effort of EU public and private institutions. The European Investment Bank is an important actor in this regard and has recently opened its representation office in Jakarta to increase its operations in Southeast Asia and the Pacific. Infrastructure projects in the region which have received EIB’s support are for example the metro construction in Hanoi and the public urban development of Jakarta. Furthermore, ASEAN and the EU have carried out various cooperation projects in smart green cities, forest sustainability, biodiversity conservation and circular economy. Discussion also highlighted the need for cooperation in clean energy, which is a pressing global issue, and the just transition. The EU does not only provide funding but also technical assistance to enhance the use of digital technology and carry out necessary legal reforms in order to mitigate the inevitable negative impacts of the green transition on certain groups of individuals and industries.

The ASEAN-EU Comprehensive Air Transport Agreement (CATA), scheduled to be signed next month, is a major achievement in promoting connectivity between the two regions. The CATA is the world’s first bloc-to-bloc air transport agreement which would bring about more opportunities for passenger and cargo services between ASEAN and the EU. Digital connectivity is another area of focus in ASEAN-EU agenda. The EU could provide technical assistance to ASEAN on various digital-related issues such as cybersecurity, upskilling/reskilling and smart cities. Also, in the transport sector, digitalization (and decarbonization known as 2Ds) are being drivers of change. The EU could share experience with ASEAN on cross-border railway interoperability and road safety, for instance.

ASEAN and the EU have engaged in discussion on a possible ASEAN-EU FTA, while individual ASEAN Member States also pursue FTA negotiations with the EU. Currently, the EU has 2 FTAs in force with Singapore and Viet Nam, and is in talks with other ASEAN countries including Thailand. Furthermore, ASEAN and the EU have started discussion on trade-related cooperation in more specific issues such as green, digital and supply chain resilience, to be able to respond aptly to these rapidly evolving challenges. Also, at the bilateral level, the EU and Singapore are working together to establish a Digital Partnership. However, the ASEAN side expressed concerns about the EU trade policy which sets high environmental standards and creates de facto trade barriers, while stressing the holistic approach of the UN Sustainable Development Goals (UN SDGs) which also take into account socio-economic aspects.

All speakers and participants reaffirmed the growing significance of the ASEAN-EU Strategic Partnership amid the global geopolitical climate marked by major powers’ tensions. Through the EU Indo-Pacific Strategy, the EU has laid out its plan to increase its engagement with countries in Asia and recognized ASEAN’s centrality within this evolving regional architecture. The Roundtable proved beneficial in stimulating a candid discussion on issues of strategic importance in the ASEAN-EU relations at present and into the future on the occasion of the 45th anniversary of their relations. 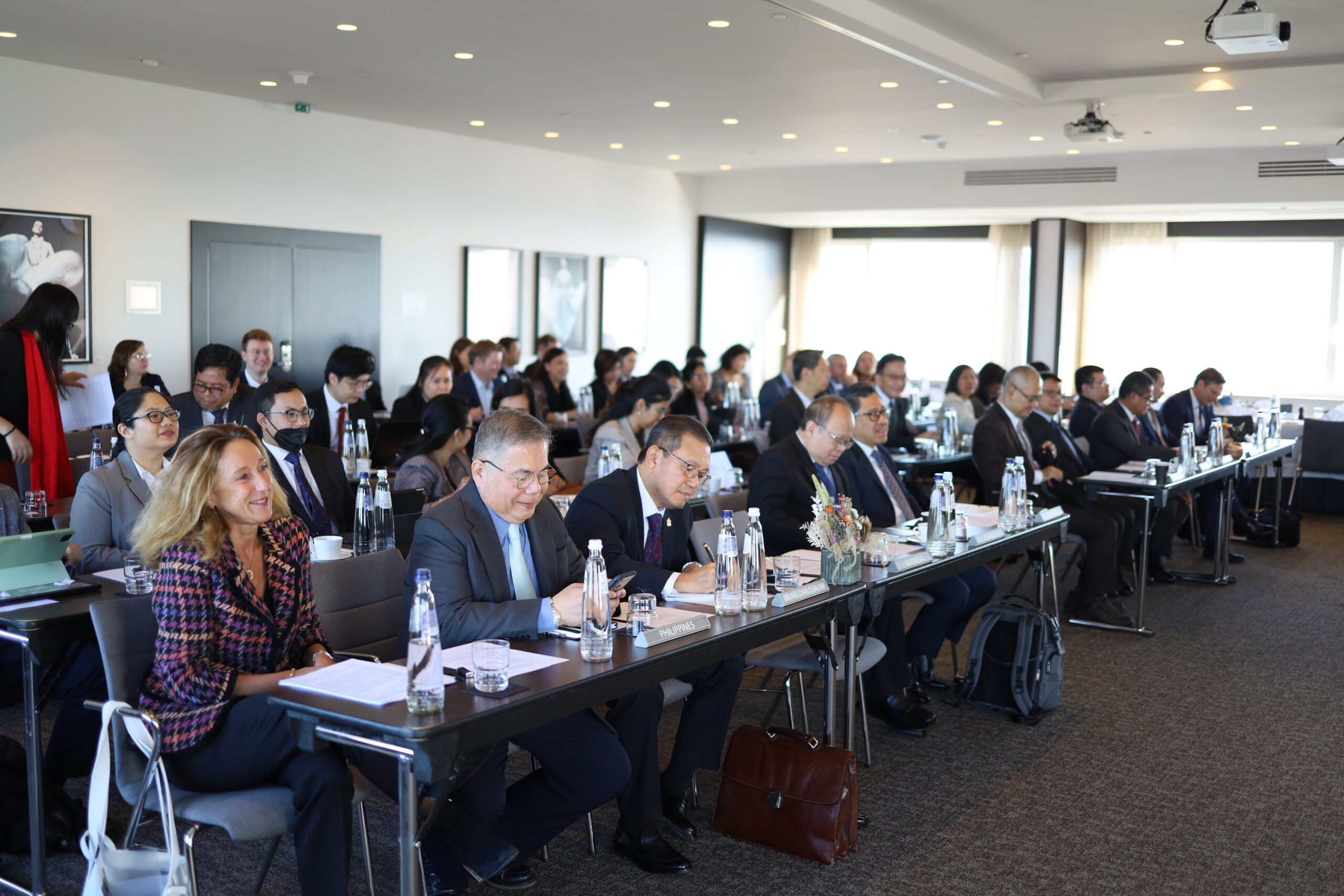 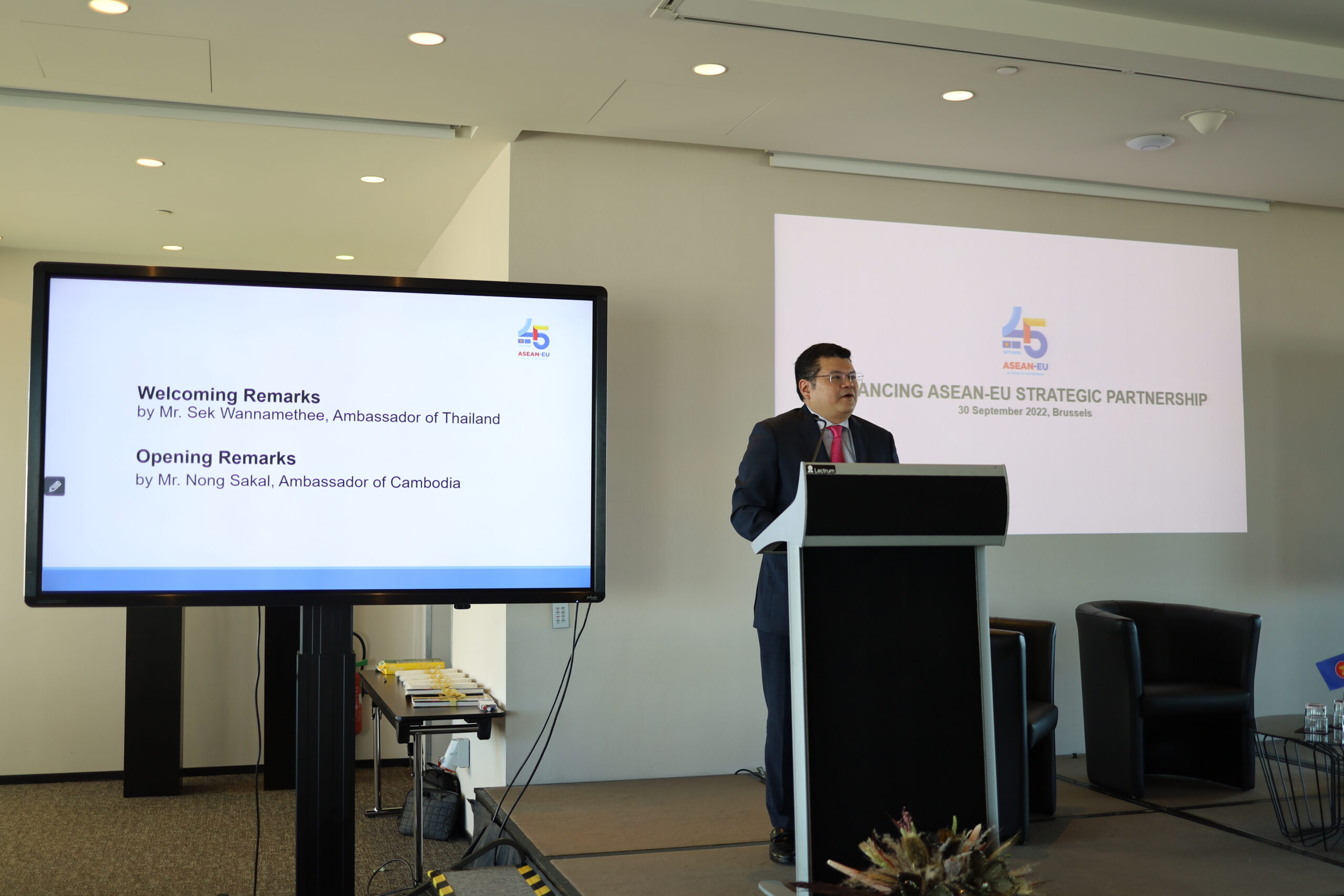 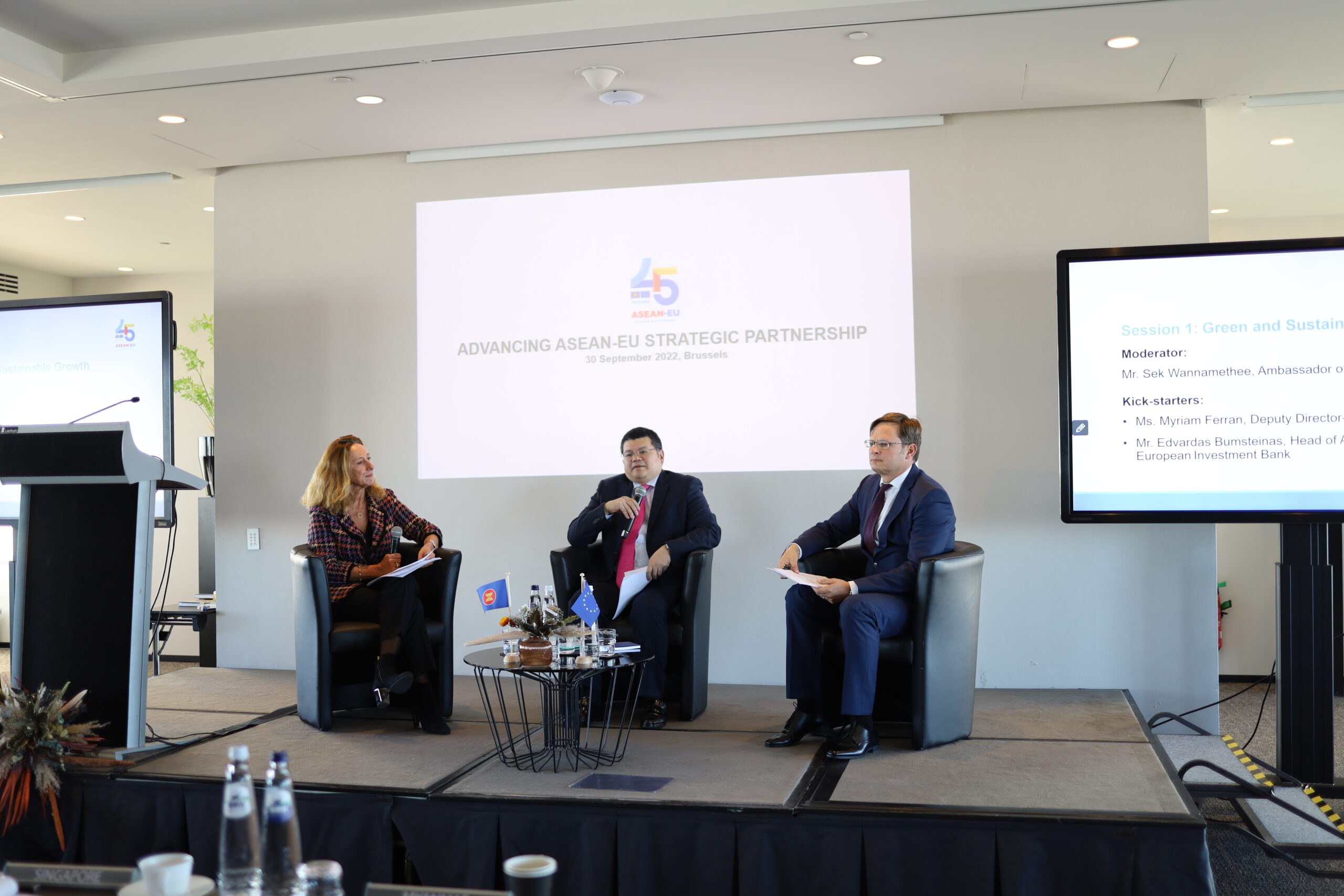 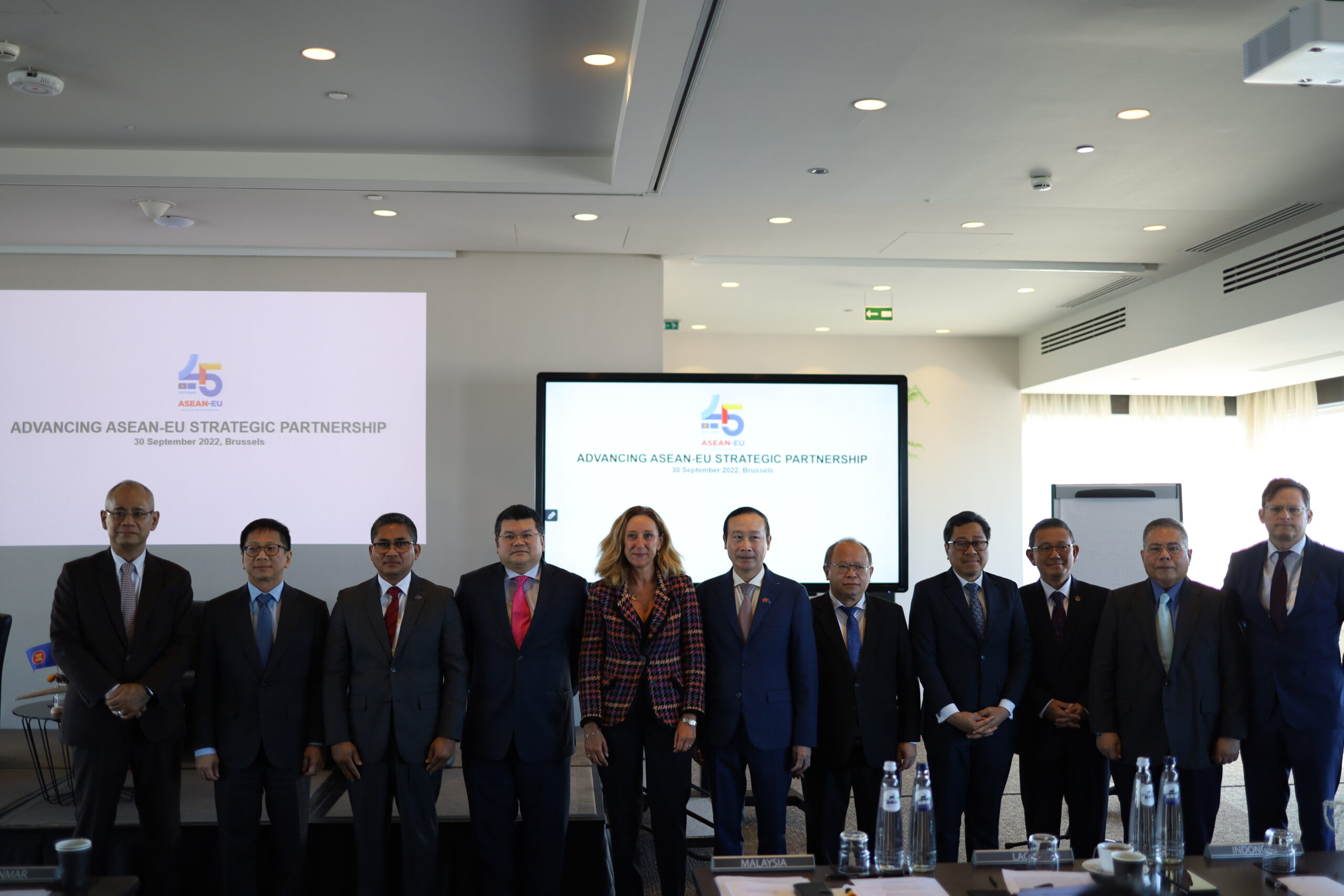 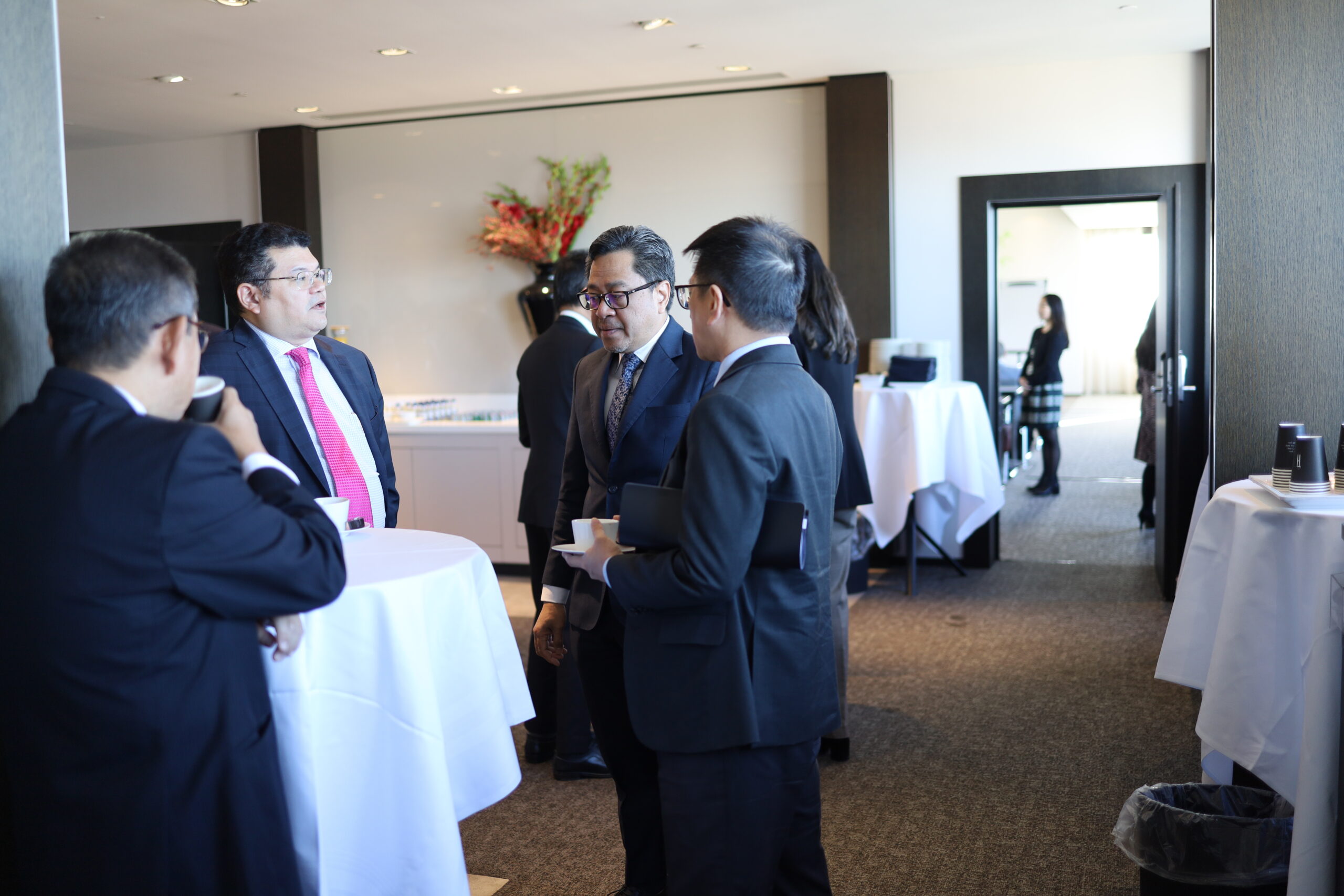 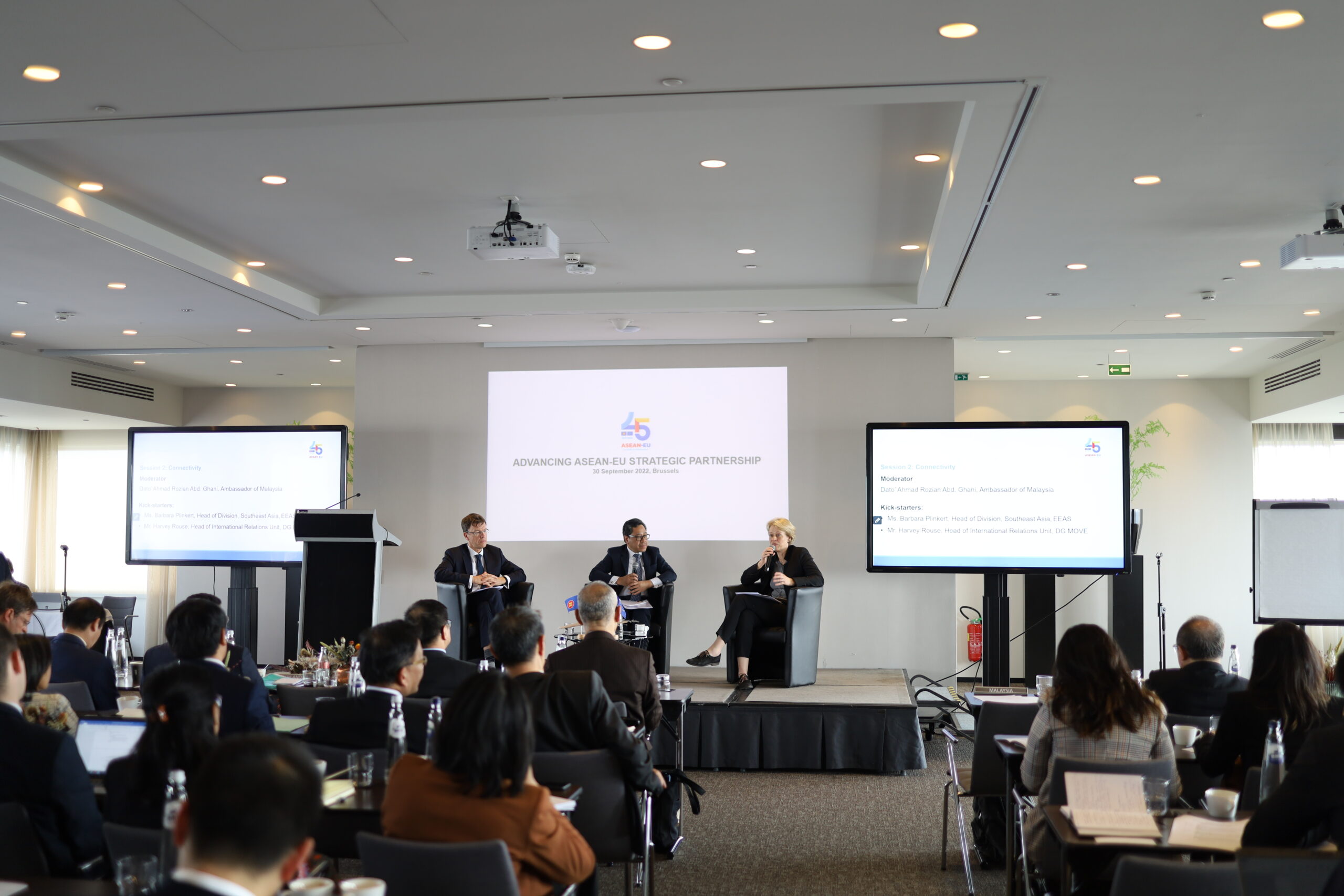 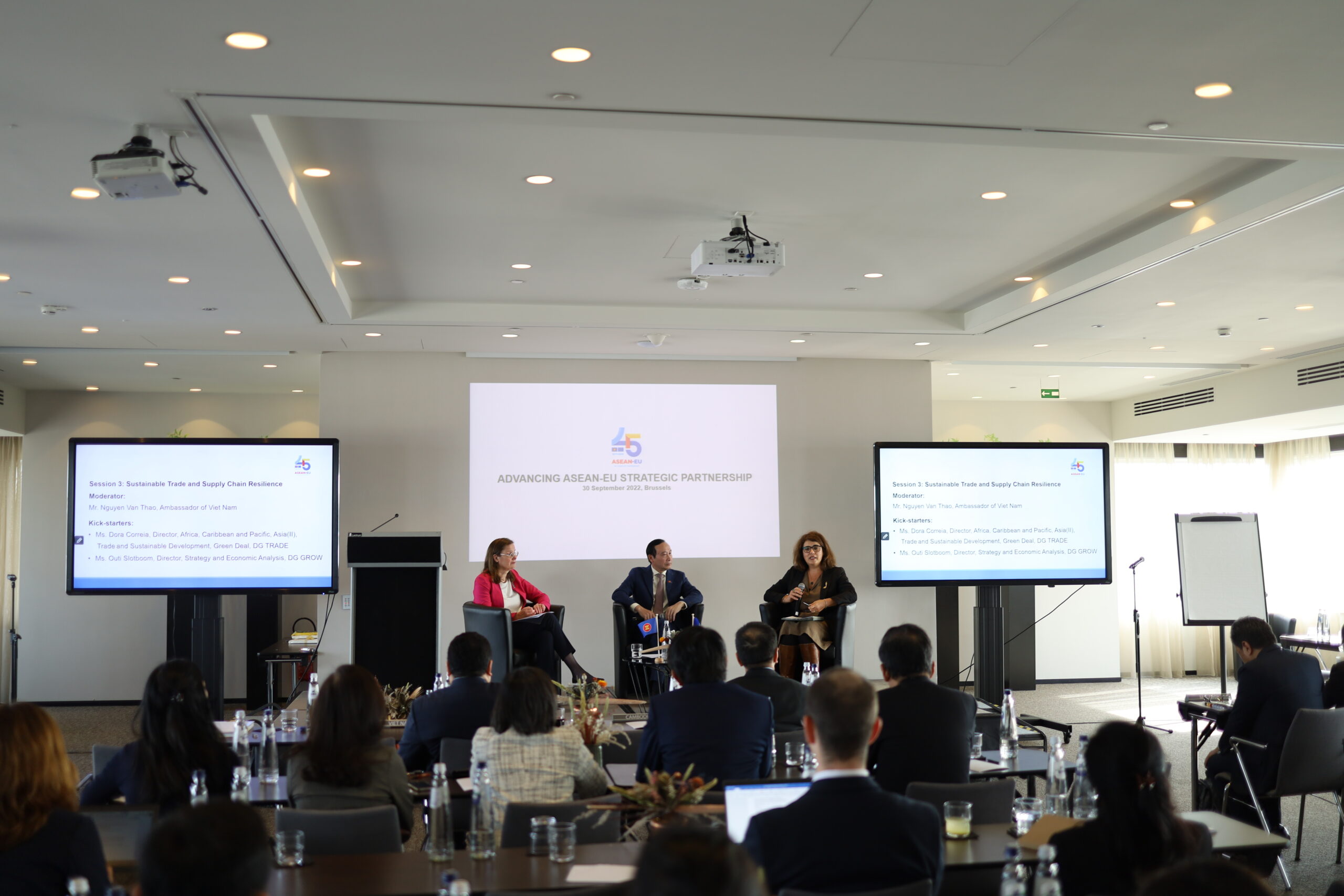 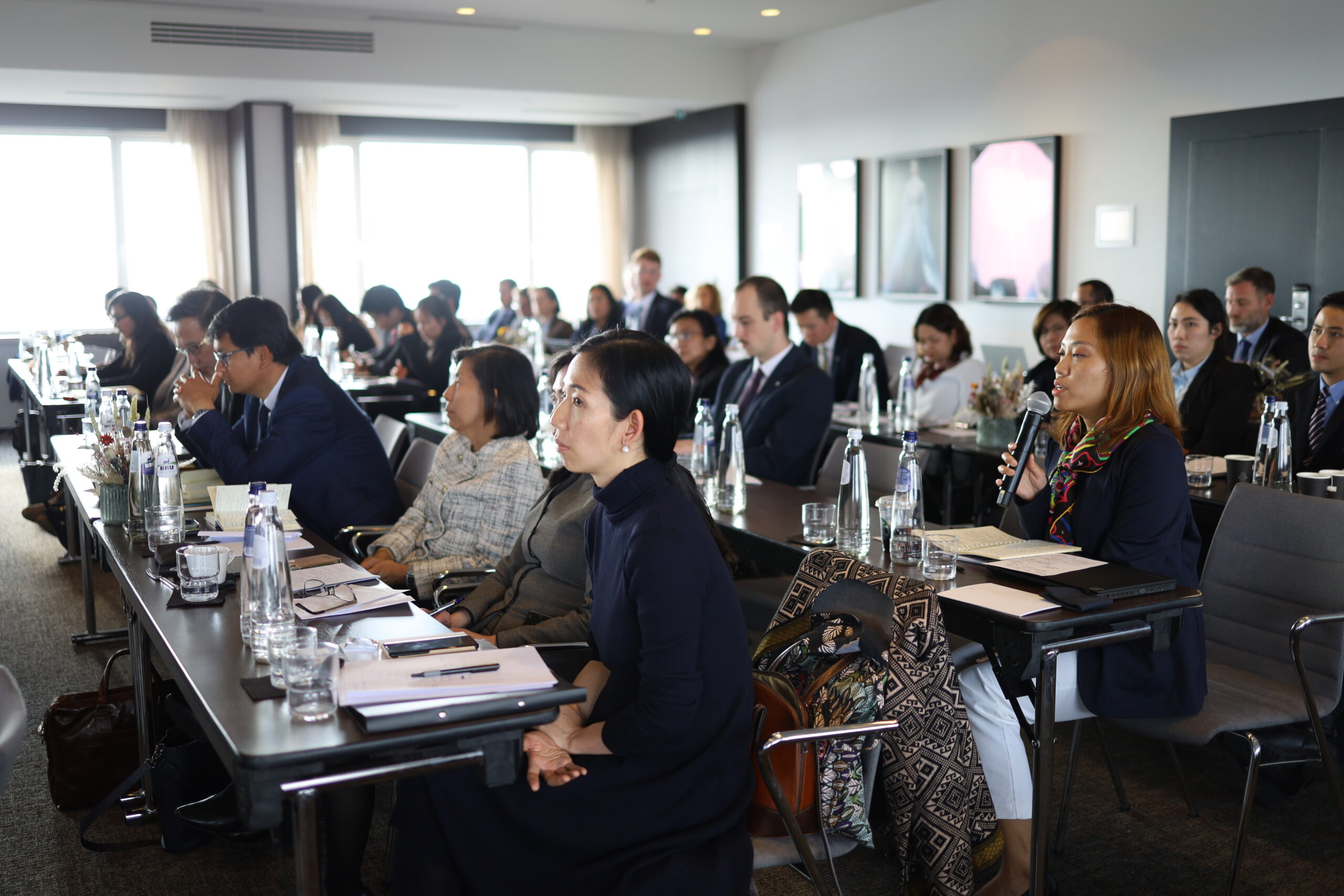